EAACONE traces its origins to the Movimento dos Ameaçados por Barragens (MOAB), which began its work in 1989. MOAB emerged in response to the proposed construction of a series of hydroelectric dams along the Ribeira de Iguape River, which if approved, would have resulted in the expulsion of thousands of people, and particularly residents of quilombo communities. The dams would have also resulted in the mass flooding of agricultural zones and protected forest areas while significantly altering the natural trajectory of the Ribeira de Iguape River and the Lagamar/Cananeia/Iguape/Paranagúa Estuary Complex. EAACONE -- Equipe de Articulação e Assessoria às Comunidades Negras do Vale do Ribeira -- was founded on June 17, 1995, in Quilombo Praia Grande, municipality of Iporanga, Vale do Ribeira, São Paulo.

EAACONE was founded to identify, articulate, organize, and assist the quilombola communities of the Ribeira valley, prioritizing their cultural preservation and attainment of territorial rights. The legal basis for the communities’ struggle for land rights can be traced to the proclamation in 1988 of a new Brazilian Constitution, which included among its provisions Article 68 of the Transitory Dispositions of the Federal Constitution, which states: “Survivors of quilombo communities occupying their lands are recognized as definitive owners, and the State shall issue them titles to the land.”

The organization gained strength, because the thinking at the time was that if communities were to succeed in obtaining legal recognition from the state as quilombos, it would be more difficult for the government to proceed with the construction of hydroelectric dams in the region. Indeed, many of the communities possessed historical dwellings, sites, and cultural traditions that were already recognized as national patrimony by the Conselho de Defesa do Patrimônio Histórico Arqueológico, Artístico e Turístico (CONDEPHAT). Upon enactment of Article 68, which guarantees collective land titles to quilombo-descendant communities, EAACONE (which during that period had still retained the moniker ‘MOAB’) initiated a process of “consciousness raising” (conscientização) in the communities, raising awareness of the new legal rights which the Federal Constitution had accorded them. This was a slow and difficult process, as many of the communities, long accustomed to living clandestinely in isolation and social exclusion, harbored deep suspicions toward state authorities now tasked with defending their constitutional rights.

The process of “consciousness raising” involved the communities’ self-identification as “quilombolas” and the recuperation of historical memory and other materials that substantiated their legal status as “quilombolas” in accordance with state requirements. The process also entailed the submission of necessary documentation to strengthen the communities’ application for collective land titles as quilombos and formation of community associations as required by Brazilian law. EAACONE was officially licensed as a legal entity on July 5, 2004. Today, it remains dedicated to advancing the struggle for territorial rights, providing legal aid and political assistance to quilombola communities in the municipalities of Eldorado, Iporanga, Cananéia, Miracatu, Registro, Itáoca, Barra do Turvo, and Iguape, in the state of São Paulo, as well as in the municipalities of Adrianópolis, Doutor Ulisses, and Bocaíuva do Sul in the state of Paraná. 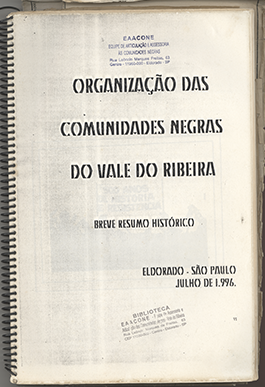 Quilombos do Vale do Ribeira SP/PR

“Quilombos do Vale do Ribeira SP/PR” is an archival collection that documents the history of the founding of MOAB/EAACONE, as well as the social and political organization of quilombola communities in the Ribeira Valley over the past thirty years. The organization of this collection took place in the context of the quilombola communities’ struggle for the guarantee of their territorial rights ... Read more.