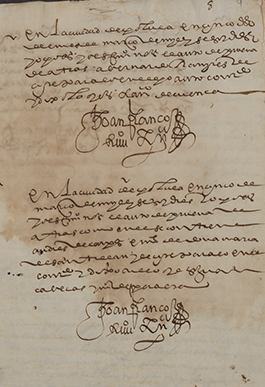 Title: Colección Digital Fondo Real de Cholula
UUID: 65f83bb9-76c9-48f5-bc19-daf5cb08737a
Description
The Fondo Real de Cholula, housed in the Archives of the Judicial Branch of the State of Puebla, comprises records of legal proceedings spanning from the 16th century to the beginning of the 20th century. A careful analysis of the Fondo Real de Cholula indicates that, together with the collection protected in the General Archive of Notaries of the State of Puebla, it forms the archive of the Corregimiento de Cholula. This institution was founded in the 16th century and then it became known as the Main City Hall in the 17th century. In 1821, it became the Constitutional City Council in accordance with the division of powers and the three levels of government (federal, state, and municipal) of the recently established Federal Republic.The fact that the Fondo Real de Cholula extends beyond the novohispano period to also cover the nineteenth and twentieth centuries means that it is a unique collection for the study of changes in the legal system. However, the repository is mostly unique in that all other Cholula files were looted or burned during the violence experienced in the Mexican Revolution, thus making this collection fundamental for the region.

The Fondo Real de Cholula is of the utmost importance because it contains the documentation of the old corregimiento of Cholula, one of the nine “Cities of Indians” that existed in New Spain, which accounts for documentation of the Corregimiento and then the City Hall. These institutions were district seats and therefore had the powers of government, law, finance, and war over Native villages, and also over the Spanish, black, mestizo, creole populations. The jurisdiction covered a large territory that today includes the municipalities of San Andrés Cholula, Cuauhtlancingo, and Coronango, among others. There are records in the collection of the four functions of the institution. 1) Government: proceedings, royal decrees, ordinances; 2. Justice: civil and criminal proceedings; 3. Treasury: financial documents delivered by the Republics of Indians under the jurisdiction of the corregimiento/municipality; 4) War: there are various provisions on the levying or seizure of goods (bread, weapons, donkeys, mules) in cases which necessitated it . The latter is exclusively about the non-indigenous population.

See more in this collection